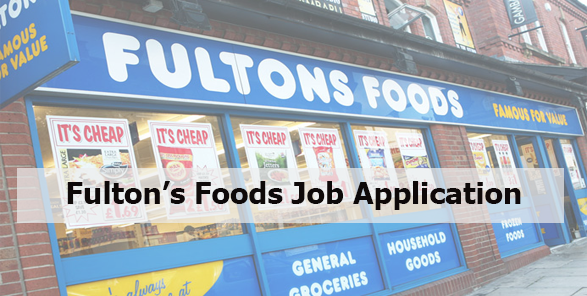 Fulton’s Foods will take on employees

Fulton’s Foods is a frozen food retailer chain, which is based in Darton, South Yorkshire, and operates throughout The Midlands and the North of England.

According to the information from and notifications of Human Resources Department of Fulton’s Foods Company, you can search for Fulton’s Foods recruitment notices and get information about the firm, as a result, apply for a job, from our website.

They operate Stores from Hull to Lancashire and Teeside to Nottingham, they are constantly expanding and are always looking for new staff. They have a Management training scheme for potential store Managers.

They have a warehouse facility based in Darton, Barnsley and employ warehouse operatives and Heavy goods qualified Class 1 and 2. Fulton’s Foods Head office functions are also based here.

Fultons Foods, a well known Yorkshire Brand trading for over 50 years, now operates from over 100 stores in the North of England.

The company was founded by Jack Fulton in 1960 as a poultry business. It diversified into frozen foods in 1974, using the company name Frozen Value Ltd. In August 1997, it was then subject to a management buy-in, financed by 3i Group, when Kevin Gunter took control of the business.